Deploying releases into production always gives goosebumps, even though we have been doing it multiple times. Different deployment strategies are advocated to alleviate some nervousness, and Canary Deployment is one of them. With the release of specific canary annotations by NGINX Ingress, we can also achieve canary deployments using the ingress controller. In this blog, we will see how easily we can perform canary deployments in a few clicks without writing multiple YAML files. In this blog, we will talk about -

Canary Deployments allow teams to expose newer features to a selective percentage of the total user traffic instead of 100% of the user traffic in a single go. It allows organizations to calibrate the percentage of users who will be exposed to the newer feature in a phased manner, for e.g., 5%, 15%, 75%, and 100%. Since Canary is one of the least risk-prone and not as resource intensive as a Blue-Green strategy, it is primarily used for production releases.

Some Benefits of Using Canary Deployments

The Nginx ingress controller is a production-grade ingress that provides routing rules for end-users to manage the routing of north-south traffic to microservices, typically by using HTTPS/HTTP. With the new releases of NGINX, `Canary` deployment has been introduced in ingress annotations. Some of the annotations that we will use for the demonstration are :

To know more about the other annotations supported by NGINX ingress, please refer to Kubernetes ingress documentation.

Let’s assume you have already deployed your application in the respective environments with ingress objects. Now for the canary release, you have to add the annotations mentioned above in your ingress object. Apply the following YAML after changing labels, service.name, namespace, and ingressClassName as per your configuration.

Tada! We have successfully rolled out a canary release. At the end of the article, we will also see how we can check the pod where requests are being directed and play around with the annotations used.

Let us now set aside the traditional approach to Canary release using ingress controller annotations and jump straight to a much simpler process using Devtron.

Time to get  our hands dirty.

Prerequisite:  Before getting started, follow the documentation to install Devtron in your system and set up the Global Configuration before deploying an app.

Step-1: Let’s create an application, that is pretty straightforward on Devtron. On the dashboard, click on Create New  → Custom App → Fill in the details as shown below and click on Create App.

Step-2: Now, we will be automatically redirected to the App Configuration tab, where we need to do a few configurations as shown below. The first is to set up the Git Repository where your application is present.

Step-3: Next we need to provide a Docker Build Config to build an image for your application.

Step-4: This is where the magic happens. Devtron comes with a pre-defined Deployment Template which contains almost every configuration that a typical microservice would need. Everything is already configured in the Deployment Template out of the box, from giving ingress configuration to autoscaling. Here we need to provide a container port where the application would be accessible, then enable ingress and give the canary annotation like we discussed above. We can also configure other parameters like resources, autoscaling, etc as per the requirement.

[Note: Ingress Controller should be deployed on your cluster before deploying ingress]

Step-5: Since we have configured our application specifications, we are ready to move to Workflow Editor to create CI and CD pipelines. Click on New Build Pipeline → Continuous Integration and provide your necessary build configs as shown below.

After creating Build Pipeline, click on the + button to Add Deployment Pipeline and provide the necessary configs as per your requirement.

Similarly, you can also create multiple deployment pipelines for a single build. In our case, we have created two deployment pipelines, one with Canary enabled and another without Canary, to check and verify services serving incoming traffic. After adding two pipelines, the Workflow editor would look like this.

Also, you can observe from the above image that after creating the deployment pipelines, we got two environments under the Environment Overrides Config. It will increase with the number of  deployment pipelines that you add. These represent the configuration you saved for each deployment. Since for the other environment i.e, devtron-demo, we don’t want the Canary Ingress, let's remove the ingress annotations from it.

Step-7: This completes the configurations. Now we need to build the image and deploy it in two different environments. i.e, canary-poc and devtron-demo. Let’s move to the Build & Deploy tab → click on Select Material → Select the commit for which you want to build the image, and then click on Start Build.

Step-8: After the image is built, we need to deploy the image to both pipelines. Click on Select Image → Deploy, as shown below.

After the successful deployment in both environments, the Build & Deploy tab would look like this,

Step-9: As we can see, the application is now deployed successfully. To learn more about the application status, navigate to the App Details tab to see a detailed dashboard with metrics and all the workloads created as per the configurations we provided while configuring the Deployment Template.

In the below snippet, all the YAML files of Kubernetes objects are already created by Devtron without having to write a single line. You can also see how easily we can navigate to different environments and check the configuration we applied for each of them with a few clicks.

Deployment is a breeze with Devtron!

Step-10: Now let’s access our application on the ingress we have given.

In the application, you can see the pod name which is serving the user traffic request. The pod is named edureka-canary-poc-59688fff4f-jmx64 since the request was routed to canary deployment. If we refresh the page again 1-2 times, we will see the pod name has changed to edureka-devtron-demo-697dd4449c-pv7qq (as shown in the image below) since it was routed to the stable release.

The magic is happening because of the ingress annotations that we gave and set the canary-weight as 50. So the incoming traffic is distributed between the pods.

Kudos! As you can now see that configuring and implementing a Canary deployments are made easy using Devtron.

Try out Devtron on multiple environments to explore more custom requirements to match your needs. Feel free to explore Devtron and join the Discord community to get answers to all your Kubernetes/Devtron questions. Check out the GitHub repo and give it a Star, if you like it. 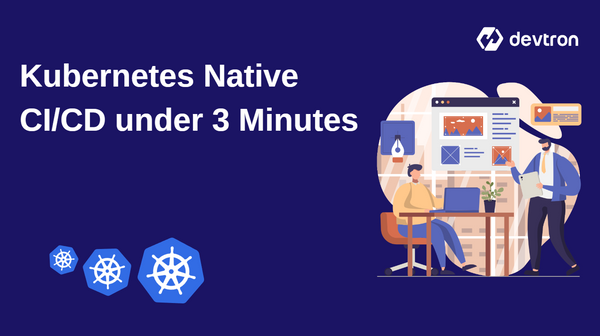 TL;DR: Setting up your CI/CD for Kubernetes is challenging. But Devtron simplifies the whole process to just minutes in a low/ no-code approach by abstracting out all the domain complexities. 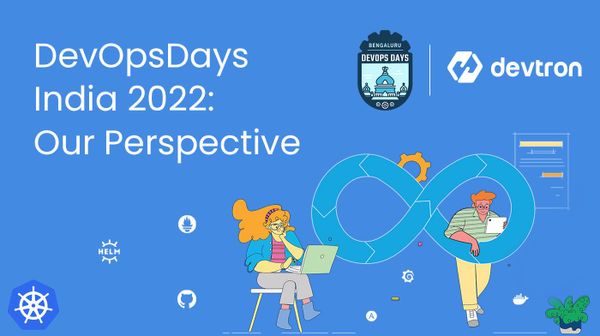 DevOpsDays India at Bangalore was a part of an international series of technical conferences covering software development, IT infrastructure operations, cloud engineering, cloud-native technologies, DevOps practices, and the intersection between